Scheltjens, Isabelle Back to
artist page > 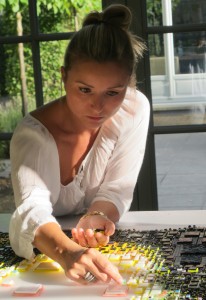 Isabelle SCHELTJENS portraits in glass are simply put – beautiful.  Their effect is a candied aesthetic, shimmering with light and buoyant energy.  Her portraits are an impassioned riposte of the familiar and iconic, re-imagined and current in effect. They exist as a compelling commentary, meticulously constructed, and ultimately breathtaking. Her colorful geometric compositions are stylized, methodical abstractions based on simple and codifiable elements.   The employment of colored glass is charted, placed, then overlayed, and fused into a unique and orchestrated anatomy.  Her subject of recognizable and revered personages offers a nod to celebrity, voyeurism and nostalgia, and assures the engagement of its audience, as it ignites their curiosity and enthusiasm.

In describing SCHELTJENS work the Pointillist are often cited, for their mastery of optical affect by which the alignment of blocks of color construct an image. And yet, the “Reinvigoration of the Portrait” owes its due to the works of both YVARAL and CLOSE who in their own insistent departure from the classical confines of portraiture, re-determined its very nature and fostered a seismic shift in contemporary art and its vocabulary. Their pixilated approach, borne of a digital age, concentrated on the facets of facial construction that asserted a novel perspective with maximal visceral affect. That and the prominence of the scale of their works were key to its influence. Inherent in SCHELTJENS’ own works is this same re-directed focus on the architecture- the elemental structure of the face.  Her employment of material – glass, the assemblage of their colored fragments, distinguishes her works, treating the viewer to a singular kaleidoscopic experience.

Residing in Belgium where she studied at the SISA Antwerp Institute of Decorative Arts and Crafts and influenced, as well, by her husband’s own work in glass, SCHELTJENS continues her magnificent and compelling explorations. Her work has been exhibited in various galleries in Europe, Middle East and Asia. Canfin Gallery is pleased to represent Isabelle in the USA.