Kessler, Michael Back to
artist page > 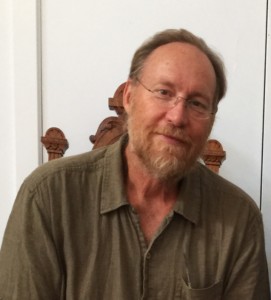 Michael Kessler was born in 1954 in Hanover, Pennsylvania. He received a B.F.A. from Kutztown University in Pennsylvania in 1978. His awards include the Rome Prize for Painting from the American Academy in Rome in 1990, and a Pollock/Krasner Award in Painting in 1992. Michael Kessler’s art has been widely exhibited in the US and abroad, and has been featured in over 70 solo exhibitions since 1983. His paintings are widely collected and appear in over 20 museum collections in the US, including the Brooklyn Museum in New York, the Museum of Fine Arts in Boston, the Philadelphia Museum of Art, and the San Francisco Museum of Modern Art. Kessler lives and works in New Mexico.

“Beneath their pearlescent skin, Michael Kessler’s paintings breathe – breathe, you might think, like the flora whose limbs and trunks course through his compositions; but, no, they breathe more as music breathes. To be sure, the spine, visual and spiritual, of Kessler’s painting is that of the natural – the botanical – world. But the sense of structure that pervades his paintings maintains an elaborate, patterned density all its own, one you start to hear as you see it. Intricately contrapuntal partitions, multiphonic overlays, shifting sequences of dark and light, large and small, flatness and texture, color and grisaille predominate in particular in his newest work. In their flow and punctuation, these latest paintings are veritable scores for hearing – or soundings for seeing. Although he acknowledges their musical nature, Kessler does not produce these tableaux in response to any musical stimulus, specific composition or general formula. Indeed, until recently his own commentary and others’ has stressed the natural – the “organic” – factors giving the work its swooping, crackling linear presence. The lyricism infusing Kessler’s painting resides, in fact, in its myriad branches and veins, factors that do not contribute to the paintings’ melodic or harmonic quality but flavor it with a nuance that determines timbre. You might say they constitute the instrumental – that is, optical – inflection here. But, to re-emphasize, such visual-sonic equivalence is no more impulse of the artist than it is the fancy of the viewer. One may be on more secure ground identifying Kessler’s structure as architectural. The off-beat recurrence of geometric forms framing and interrupting the persistent, underlying treelike forms and images can certainly be likened to eccentric arrangements of windows in the façades of modernist buildings: Le Corbusier and Niemeyer would recognize Kessler’s sense of order as a recapitulation of their own. In many paintings the trees and branches appear framed by these apertures. But, goes the aphorism, architecture is frozen music, and there is a flow to these paintings’ disposition that urges the eye to travel, to see all the visual incident as at least potentially in flux. Deliberately or not, Kessler may have determined the moment at which architecture’s solidity gives way to music’s fluidity. All that said, note should be made as well of the mood – the tone – set in these paintings. It is a shifting tone, one that doesn’t simply set organic intricacy against the geometric pacing of a built environment, but builds on the animated superposition of these two sets of elements, on the contrast and the continuity that maintain between them. Certain of the newer paintings can seem brittle, dry and wintry, while others radiate an earthy warmth. They evoke weather and flavor, age and scent. Metaphorically, at least, these paintings appeal to all five senses. You can taste them with your ears. Michael Kessler invites such synesthetic hyperbole through a process of deformulation. He restricts his vocabulary to certain subjects and certain forms, then breaks down these forms and subjects by running them into and through one another. In musical terms, it is a formidable polyphony – a polyphony felt with an immediacy that transcends, or more to the point breaks through, metaphoric equivalency. You do hear them with your eyes.”  Peter Frank, 2012, Los Angeles.